Since the start of the Nursery School Program, we have observed the children building several structures using the blocks and planks. Working together, they have built “houses for the animals” “ramps to race cars down” and “tracks” for the cars and trains.

Today CG was very intent on making a “ramp”. While watching him work you could see he had a clear plan as to how he was going to construct the ramp. Carefully placing a plank on the edge of a wooden box. At the end of the first plank, he used a smaller bucket to support the first and second plank creating a gradual incline. CG inspected his work, he then began to add more support under the second plank. Placing blocks carefully under ensuring that each block lined up and was stable. CG continued to work for over 10 minutes making sure his ramp was secure. When he was done CG explained “cars go on this ramp” Demonstrating with a car how it rolls down.

While observing CG work, we realized that he was very focused on building a ramp that was safe and structurally sound. There was thought put into how he could best support the planks and how they lined up. Once the ramp was built to his satisfaction CG felt his work was done and was happy to allow the other children to use the ramp for the cars while he stood back and admired his work.

We learned from watching CG that he has a great work ethic! He is very focused in his work and able to follow through with his plans working with the materials available. We wonder if maybe someday CG will become an engineer! 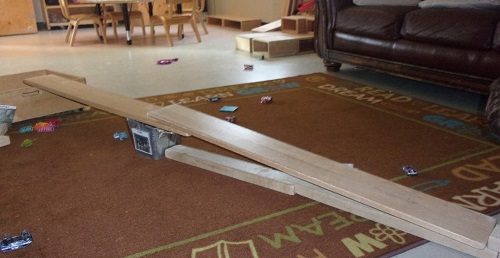