This morning we noticed V laying under the table. This is not something she normally does so we sat and observed what she was doing.

‘Get me the wheel L’ She said from under the table. L went looking and found a small wooden bead that looked like a wheel. ‘The big one’ V continued to explain. We could see L looking around trying to find a larger one that nobody was using. After a few seconds she found one and handed it down to V. ‘Thank you, I need a screwdriver’. She told L ‘your turn’. L then went under the table and V handed her a ‘wheel. You want a screwdriver?’ ‘yeah!’ L replied. Shortly after this E joined and all three of them were under the table. They had long pegs that were set up at the table for putting beads on. But clearly had their own wonderful and creative idea for them. They all had their pegs pointed into the screws under the table. V making struggling sounds as she turned the peg using it as if it were a screwdriver. The 3 children came and went several times from under the table. ‘You can’t help, you get booboo. It’s really dangerous.’ V exclaimed to her friends as the play continued.

They revisited this same play later in the afternoon, recalling what they were doing early in the day and what materials they were using. ‘Let’s fix the table’ V said as she encouraged L to join her in play again.

This moment shows the creativity and imagination that these children have. How by allowing the children to move our materials around the room we can see them being used in many ways. We can learn from the children that open ended materials can inspire them to communicate their interest and allows for them to work alongside one another to grow their relationships with peers and materials in our environment. There is so much learning that can happen with the ability to represent their ideas within our space. 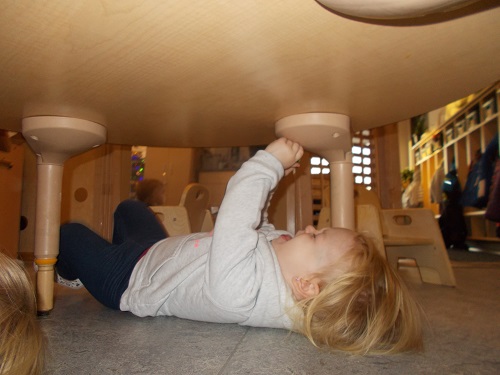 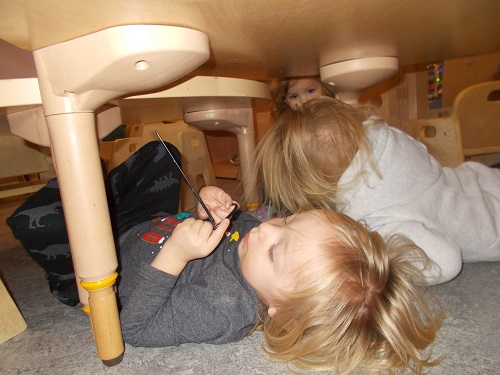 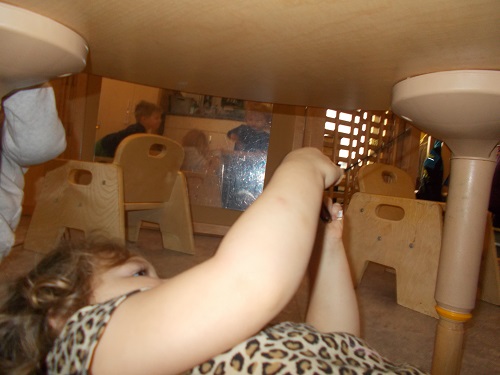