The month of December can certainly be a cold one, so the kindergarten children spend a lot of time in the gym. A few children were engaged in a fast-paced game of hockey when K yelled “I need some help”. The children who were spectating seemed to have no interest in joining the game and you could see K's frustration growing.

In a flash, A jumped up and picked up a stick. “OK, I’ll help!!” He looked slightly uncertain to the new faces watching/playing the game, “Here A, I’ll pass it to you”! C shouted while circling the puck with his stick. “Let’s do this” K chimes in. They go back and fourth, passing the puck to each other and using encouragement, keeping the game exciting.

When the game was over, the boys were observed in a discussion. C was thanking A for “playing awesome”. Upon hearing these kind words, A’s face lit up and it looked as if he was so proud of himself. Although they didn’t win or even tie the game, it didn’t matter.

What had happened was the realization that they were a team, being on the same side could be really fun and exciting. When you’re given a genuine compliment it really wakes you up inside and fills you with joy and pride, it makes you want to give your all for the best interest of the team and your team mates. 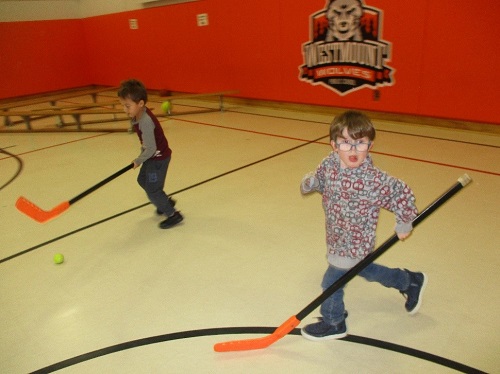