TELL US A STORY!

Early in the month 'H' inspired a spontaneous story time. 'H' placed four soapstone people on a large hollow block and began playing.He was babbling/singing to himself, as he moved the people, pausing and making one fall off. These actions resembled a popular song we have recently been doing 10 In the Bed. To test our theory that 'H' was re-enacting this poem we began singing, 'H' smiled and began humming along knocking a person off the block when it was time. This caught the attention of the children and they all watched as 'H' took the lead in the poem.

Over the next couple of weeks, we added more props from two of our favourite poems Five Little Ducks & Five Green and Speckled Frogs. We were curious…Would they recreate the poems or make up their own stories? What we observed were the children coming together and sharing their ideas with one another.They were transporting the props, using the whole room for their stories, setting up the people, ducks and frogs on the shelves, floor, tunnel and blocks, either recreating the poems of making up their own narrative.

For the remainder of the month, the children continued to work collaboratively.Each morning as they arrive, they gravitate towards the ducks and frogs, often bring one to a friend as they arrive.We continue to support their discoveries and have added more props for dramatic play both in our indoor and outdoor environments. 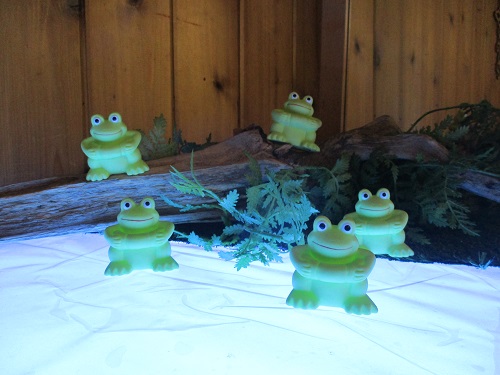