In the school-age program 'D' was exploring drumming! It started when 'D' started to dump the carpet activity bins out onto the carpet when asked what he was planning on doing he excitedly said “Drums!” and continued dumping the bins. Once 'D' was done dumping the bin he started to set them up how he wanted. He moved the bins around till he was happy with it.

'D' then decide to incorporate other items into his drum set. He added wooden sticks as his drumsticks. 'D' then decided to incorporate the chair legs as his cymbals. 'D' then wanted to add different pieces to his drum set. So, the following day he went with an educator to the recycle center and he picked out some items to add to his new drum set. He picked out a plastic container, a piece of wood, a metal bucket, two black spools, one red set of lids and one blue set of lids. He then arranged the object and started to tap them with the two wooden sticks saying “Drum, drum!”. After a few minutes of 'D' exploring his drum set on his own he called 'E' over to explore with him. Then 'S' also joined in the fun and she added in some different pots and other objects to 'D'’s drum set. 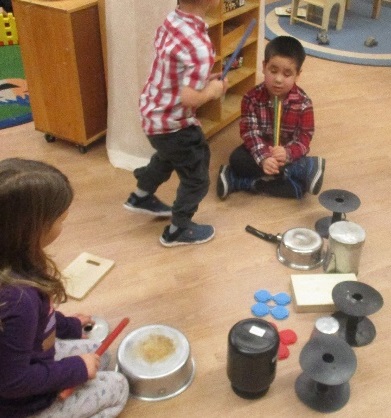