Out on our community walk, 'G' kept pointing and looking up. We stopped to ponder what is catching his eye… Could it be a plane? The clouds? A bird? We continued to watch as we walked along and noticed that 'G' would follow what he was looking at as we would pass by.

We suspect that it is the street signs that was catching his attention!

We tested our theory of the “sign’s?” with the children on our walk. We took a different route and pointed out all the signs we saw. We helped draw attention to the signs by tapping and tossing rocks to hear the “ting!” The children enjoyed these explorations, getting to tap the sign’s themselves and going under the signs.

Later we thought we would extend our sign theory exploration with the spoons from our room. We felt the spoons would be a good connection to the sound element as they are often used on our music wall in the program. However, we didn’t end up exploring sign’s. Instead, it turned into “what we can tap on” and the different sounds in our community.

We happened to be so lucky to come across city workers fixing a street light on our work! The children watched in amazement as the basket rose and the man used his drill – what an amazing extension from our past discoveries. We also stopped to watch the “no cross” light flash as we reached the end of the road. Had the light drawn the children’s attention? Then we took our discoveries another step further we when came across a sign at the stroller level. Is it truly the sign’s catching their attention or is it them figuring out a different perspective – height? 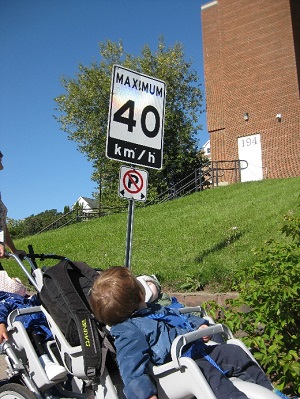 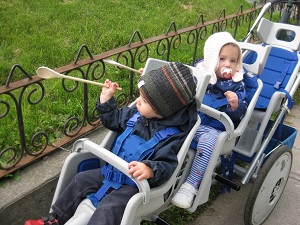