Recently we have noticed the children repeating the same actions over and over again in different areas of our room.For example, Eli was interested in the fan pushing the buttons making it go faster or slower, on and off. One of thoughts was perhaps they were exploring cause & effect.

Early one morning in the beginning of August, we noticed Eli had returned to the fan, once again pushing the buttons, smiling when the fan blew across his hair.When he turned it off, Jen would ask him to turn it back on, Eli smiled and tried another button watching the blades spin at different speeds.

Later in the morning Callen was exploring the touch lamp. Laney was holding Callen and showed him what happens when you touch the base of the lamp.Callen leaned over and tried for himself, and to his delight the light got brighter and brighter until it turned off. Laney moved the lamp lower to allow for independent discovery. Callen inspired his peers that were watching what was happening.For several minutes the children took turns tapping the lamp watching the changes in the light.

These observations have sparked a greater exploration of cause and effect in our program.We have added magnets, lights, a busy board and other loose parts to provoke the children’s thinking.Most recently we have noticed the children exploring the magnet rods, testing where they will “stick”. 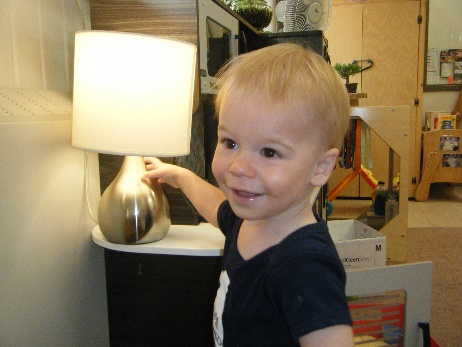