Today we observed Carson at the table while he explored clay. Carson doesn’t typically like sensory experieces so it was very interesting to watch him join into this one. Carson joins the table last after watching his peers explore the clay. Was he unsure about this new material? Did he not want to get messy like he saw his peers doing? Did he need to process what was happening before he felt comfortable to try? Carson picks up two sticks and pokes them into either side of the clay and pulls them out. He angles his head and looks at the holes he created. He smiles and laughs. Carson does this again, this time he pokes it all the way though. Carson lifts his popsicle sticks up in the air with the clay still attached. Did he put them through on purpose? Was he trying to lift up the clay instead of leaving it on the table? Is he exploring cause and effect through his actions of placing the sticks in and lifting his arms and the clay being high in the air? Carson looks at the puddle of water that has accumulated on the table and drags his popsicle stick through. This action leaves a line going across the table. Carson smiles and does it again. Does he notice his actions are leaving marks on the table? Carson sticks the popsicle stick into a chunk of clay and dips the clay in the puddle of water. He drags the piece of clay that is stuck to the stick across the table in a straight line, then starts making circular motions with his arms. Did he realize it was the clay that was leaving marks on the table and not the water? Is he independently exploring alternative painting techniques? 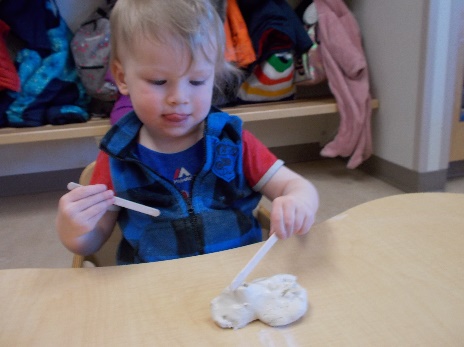 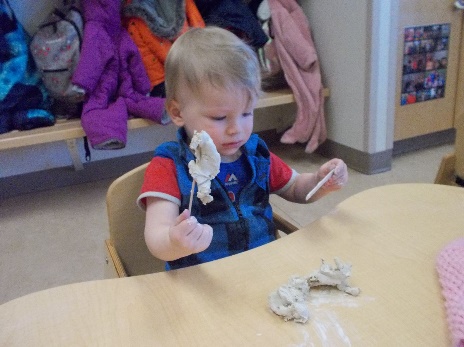