The children in the toddler program have been expanding their dramatic play, most recently pretending to be animals. Their discussions have centred around the features that each animal possesses. To expand upon this, we traced the children onto a large sheet of paper and they added their own features, becoming the animals that they were acting out in their dramatic play.

The following week, Eloise pulled out the long roll of paper. “Trace me E!” she said. Eloise laid down on the paper and E began to trace her body. Loxley observed, “Me too!” she exclaimed as she laid herself down. They took turns tracing each other’s bodies. When they were done, they began to add features.“I have 3 eyes!” E stated as she drew 3 dots on the face on her paper. “Here’s my belly button!” added Liam as he added a dot to the stomach area. “We need a big smile” continued Eloise, drawing a long line across the face. The children continued to add features and colours to the many sheets of paper. “Me!” Loxley exclaimed as she pointed at the coloured picture. What co-operation and teamwork as the children worked together in this child-led activity! 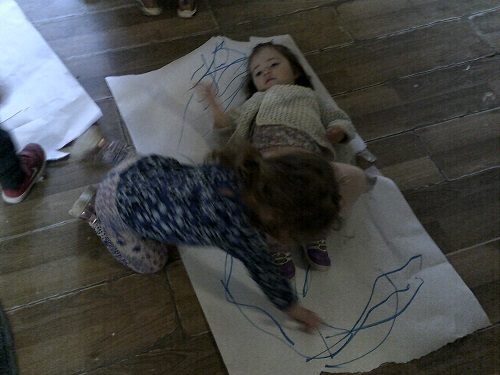