Today we introduced glue sticks into our art area. The children have mastered using white glue and tape to adhere to add details to their art creations so we thought using glue sticks would be a great way to expand on their skill sets and not to mention use up the recycled paper clippings we’ve been saving for future projects.

As we had conversations about how the glue sticks work and what it can be used for we received quite the crowd of interested children. Among the crowd was Duncan who typically doesn’t gravitate into our art area and wanted to work on an idea he had.

For the next hour Duncan created his “Guy” and the following is the dialogue and his thought process that took place:

Duncan: “I want to make a guy”

Educator: “Ok, so lets think about what you want your guy to look like”

Duncan: (added two confetti pieces side by side) “These are his eyes” “Now I’m making a mouth” (uses a long orange piece of cardboard paper) “Now he needs teeth…lots of teeth” (grabs a large green piece of paper) “I’m going to cut this small, because I need lots of teeth” (proceeded to cut long pieces off the green paper and glues each piece onto the orange mouth)

Educator: “so now that you’ve made a mouth with teeth, what do you want to add next?”

Duncan: “I need lips” (cuts two long snips of red construction paper, adds one on top of the mouth and one underneath) Duncan then asks for assistance on what to add next. Duncan and the educator look at each other’s faces to see what details he may want to add. “Eyebrow!” (Duncan then adds another long snip of red construction paper over the eyes and then above the mouth) “He has a eyebrow above him mouth because he’s silly like that” “Now I need a body” (grabs a whole piece of white paper and glues it to the bottom of his green piece)

Educator: So now that you added a body, what details do you want to add next?

Duncan: “A belly!” I want it little” (grabs pieces of tinfoil and glues them onto the white paper) “Now he needs feet, but he needs legs first” (grabs a whole piece of red paper and glues it to the bottom of his white paper) “Here’s where his legs need to go” (draws two vertical lines with his fingers) “legs…it needs two lines” (he then asks his educator to help put the glue where he pointed while he chooses which confetti pieces he would like to use) Duncan then adds several pieces of confetti and pauses “I want the feet to be on top…I want it to be silly” (adds a silver flower and a black leaf) “His hands are at the bottom” (places a green leaf and a blue flower on the bottom of the legs) “Ok I’m done now” 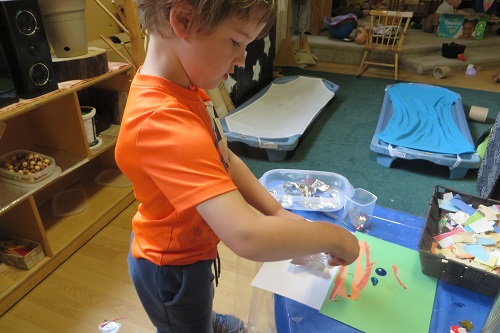