As the weather began to change the children could barely hold back their excitement as they were eager to go outside a look for worms. This interest began as children talked about summer activities and one that was commonly shared was fishing. As the children shared about what they knew about fishing, Lillian shouted with excitement, “you need worms to catch the fish”. So, to support and extend this interest within our program, we went on daily worm hunts with the children throughout the yard to see how many worms we could find. As we continued looking for worms the children would fill up pails with dirt and place the worms into the pails as they said it was the worm’s home. This continued inside the preschool room as the children would make worm homes inside our sand box and the educators had added pretend worms to the sand to help promote this play. As a week went by the children wanted to bring their large collection of worms inside to put in their sand homes, so we did just that. The children helped to transform our sand box into a large worm house, they helped to cut newspaper, add soil, spray the area and lastly, they were eager to add the worms into their home. The children were then able to watch the worms develop and grow in their environments created by all the children themselves. Each day the this brought excitement to the children as they spent lots of time feeding them fruit, digging holes for the worms to crawl through and giving them water. 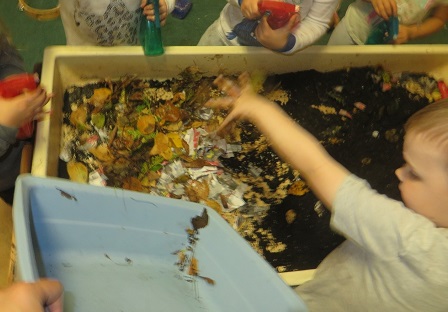 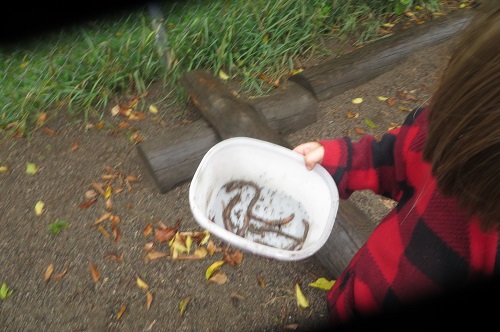