This afternoon Zephaniah made a discovery as he was exploring our outdoor play space: it was a LEAF! He was quite fascinated by it; he held it in his hand and began to move his arm up and down, then back and forth. To his excitement, the leaf fluttered and bent with his movements. Zephaniah became very excited and bounced up and down with a big smile on his face! He was quite entranced with the leaf, and remained in the same spot for several minutes before he moved on.

I wonder what his thoughts were about the leaf. Did he realize he was making the leaf move on his own? It was quite windy that afternoon as well; could the wind have played a part in his experience too?Perhaps some leaves and maybe some feathers could be introduced into the room for him to explore! 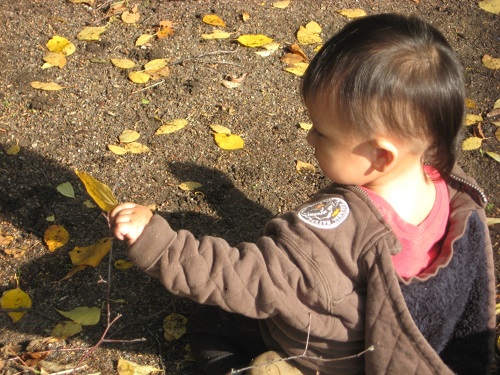